Enjoy amasing Giverny Etretat Private Tour with a license guide. Above all travel west of Paris to see the wonderful house and gardens of the leader of the impressionist Claude Monet in the village of Giverny. After that then continue to Etretat which is famous with its breathtaking and magnificent cliffs on the Channel.

After your arriving at the Claude Monet Foundation you will start your Giverny private tour by walking in the Claude Monet’s gardens, one of the painter’s sources of inspiration.

You’ll gaze at the wide variety of Oriental flowers, the wonderful paths, and the flower beds beautifully flowered with a thousand of colors.

You will stroll through the water garden with its famous Japanese bridge sheltering the lily ponds. They inspired Claude Monet for one of its most famous paintings, the “Nymphéas” (Water Lilies).

In addition you will then discover Claude Monet’s house, in which he lived with his family for 43 years. You will immerse yourself in the artist’s daily life by crossing the blue sitting room, the dining room and his studio, that were completely refurbished.

After that under the impression of the picturesque gardens with its beautiful and colorful flowers you will continue to the commune of Etretat.

Étretat is a seaside, small farming town on the north coast of France, a very popular tourist destination. It is home of Elephant Rock, which gets its name due to its resemblance to the large land.

So, Etretat is known for the striking rock formations carved out of its white cliffs, including the Porte d’Aval arch and L’Aiguille (the Needle), a pillar rising up from the sea. To the north, the Cliffside Chapel Notre-Dame de la Garde has dramatic views. Le Vieux Marché is a market hall in town.

The cliffs steal the show at Etretat, thanks to their exceptional natural drama and aided by the fact that famous Impressionists painted them so memorably.

As a result erosion has created extraordinary arches in the chalk either side of the resort. There’s also an amazing needle-like structure, known in French as an Aiguille.

There is more to Etretat than the cliff formations and the thick pebble beach, though. The small resort behind is full of charm.

After that, back with the cliffs, you can go for some stunning walks along the cliff tops, where further surprises await, including a breath-taking golf course. Return to the famous cliff formations on the beach at night and you can see them magically lit up.

Please note: In conclusion of Giverny Etretat Private Tour the transportation will be waiting for you at the meeting point for your return to Paris.

You can also enjoy others combined of Giverny Private Tours.

My family of 6 is full of art lovers, and we wanted to take a day trip to Giverny to the house of Claude Monet. This tour was fantastic! Fred, our tour guide, picked us up promptly at the set time, and drove us in a very nice van through Paris and out to Giverny. Along the way we get a lot of information of historical background to Monet, including a great overview of French history, as well as the story of Monet himself. Fred was able to answer all our questions and then some; he was very knowledgeable. Once in Giverny, we entered the grounds quickly, and Fred oriented us to the gardens, and then set us loose to explore. When we were done, he had secured a table for us at the busy cafe. It was a great day, one we will long remember!

Wonderful guide on an overcast day

What a delight our guide and the tour was. There were 4 of us. As we left our hotel, our guide began immediately to discuss Paris and Monet. He arranged for us to be there a little early prior to the gardens officially opening so that the gardens were not quite as busy. It was a Monday in October. He took us back a different way so that even returning, we received wonderful information.

My wife and I spent a wonderful day with Fabian at Giverny. He was not only super-punctual, but he also knew many interest facts about the property and Monet. We arrived about two minutes before the site opened and we were not rushed in the least bit. Although this tour was more expensive than some, it was worth every penny.

Please note: This product is upon request. We will confirm availability within the shortest possible time after we receive your order.

Giverny closed from November 1 till April 1. 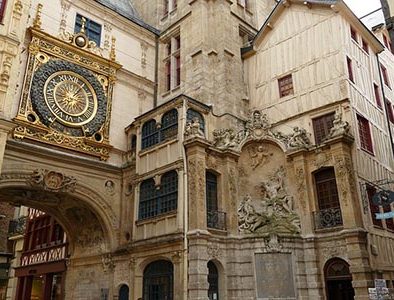